{content}
North Lincolnshire CouncilJobs, business and regenerationInformation on Digital Infrastructure and connecting to the internet

Information on Digital Infrastructure and connecting to the internet

Digital infrastructure is a means of connecting to the internet via broadband or mobile connectivity such as 3G, 4G or 5G. 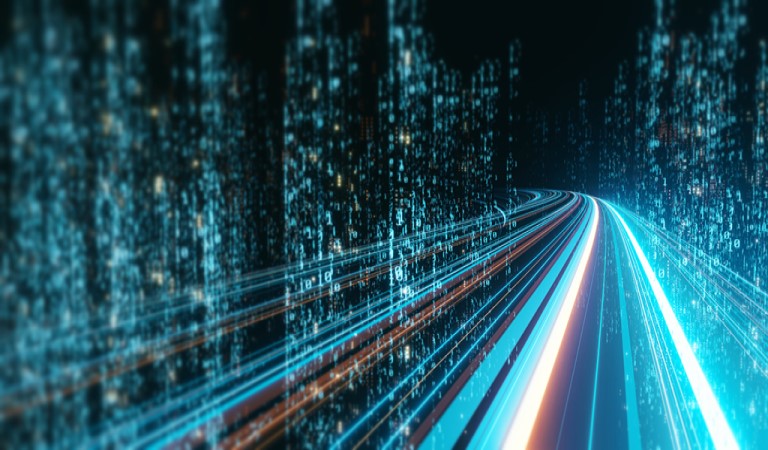 How are we looking to enhance the digital infrastructure in North Lincolnshire?

As technology continues to evolve, it is vital that all local areas have the digital infrastructure able to meet the demands of consumers and businesses both today and in the future.

The transformation of public sector assets, such as lamp posts into “smart infrastructure”, means we can now supply public access to WI-FI, support environmental monitoring, such as air quality or flooding, or even monitor pedestrian flow or parking spaces.

By working with the Government and telecoms providers, we are committed to bringing the best digital infrastructure to North Lincolnshire, including ultrafast broadband and a 5G mobile network.

Access to fast, reliable internet connectivity is no longer a luxury; it is a necessity for residents, local businesses and public services and North Lincolnshire Council are fully committed to exploring all options open to them to enhance the digital infrastructure even in our most rural places.

The council is also working with Building Digital UK [BDUK] which is a Department for Digital, Culture, Media & Sport (DCMS) directorate responsible for programmes delivering superfast and full fibre networks across the UK. It is the council’s ambition to deliver 100 per cent gigabit internet provision to North Lincolnshire.

The outcome of these programmes will contribute to national targets of achieving 85 per cent of premises with gigabit connectivity across the UK by 2025.

We continue to develop relationships with commercial suppliers in North Lincolnshire such as ITS, KCom, Openreach, InternetTY, Quickline and Virgin.

During the deployment of the new infrastructure, we will work with suppliers to identify local interest by using demand stimulation activities. We will encourage take-up of broadband services for residents and businesses by increasing the understanding of its benefits and supporting greater commercial investment.

Read what the council is doing to help residents to get online.

Broadband is the ‘always-on’ way of connecting a computer to the internet using a copper, cable, fibre or wireless connection

Although there is no universally accepted definition of different types of broadband, it is often defined by its download speed, ie the speed at which a device can receive information (data) from the internet. A broadband connection’s upload speed ie the rate at which data, such as your photographs or videos is sent to the internet, is also a vital component of ensuring a high-quality online experience. The speed at which data is downloaded or uploaded is measured in megabits per second often abbreviated to either Mbit/s or Mbps.

The Government and Ofcom use the following terms to define a connection’s speed:

Broadband that offers faster download than upload speeds is often referred to as an asymmetric connection. Asymmetrical connections are caused either by limitations in the capacity of the digital infrastructure or because the internet service provider (defined later) limits upload speeds.

Broadband services delivered over copper telephone lines often suffer from lower than advertised headline speeds because the signal degrades with distance. Full fibre connections, where the fibre optic cable extends all the way to the customer premises do not suffer from the same problems.  Hence full fibre connections are capable of delivering very high speed, symmetric services, often of 1 Gbps (1,000 Mbps), irrespective of location, urban or rural.

What can you do with different types of broadband?

Similarly, while many parts of the country take for granted the existence of ever-present, high-quality mobile connectivity, there are significant gaps in coverage. These gaps are usually found in rural communities, where residents suffer from partial mobile coverage, where not all mobile network operators cover an area. ‘Not spots’, where a mobile phone will not be able to make a call on any network, can be common.

5G is the fifth generation of mobile networks, following on from previous mobile generations 2G, 3G and 4G. Compared to most of today’s networks (which primarily use 4G and 3G technology), 5G is set to be far faster and more reliable, with greater capacity and lower response times.

The mobile checking tool is designed to help you find out about the availability of mobile services in a particular area.

The Government has pledged for the entire UK to have access to gigabit-capable speeds by 2025 to catch up with the rest of the world. We have seen specialist internet providers like KCom, ITS, Quickline already investing in North Lincolnshire.

The Council has already been instrumental in connecting thousands of premises in the place of North Lincolnshire.

Did you know you can check your broadband availability and speeds for your postcode and surrounding area? Visit the following websites and enter your postcode:

What can a family do with different download speeds at home

While a decent broadband or a 3G mobile connection will enable basic web browsing, if a family wants to enjoy increasingly high definition videos such as 4K (Ultra HD) via demand services such as Netflix or BBC iPlayer, they will need a faster connection, especially if several people in a family are using different services at the same time. 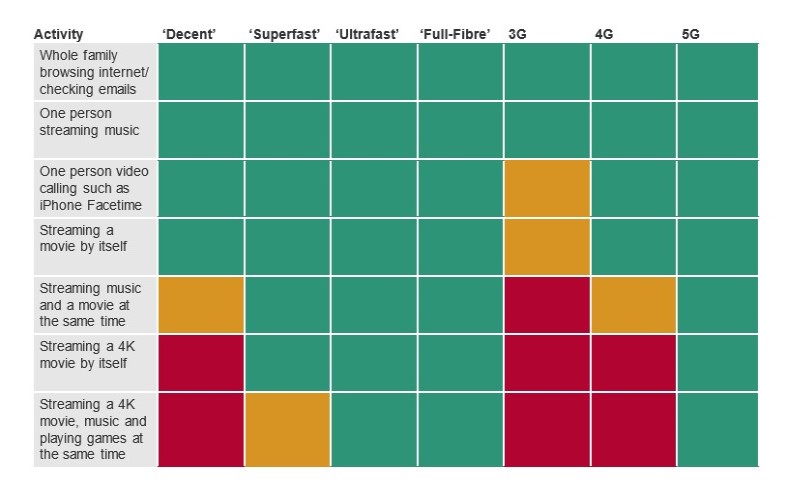 What can a business do with different download speeds

For any business, internet connectivity is essential. With superfast broadband, businesses can communicate with customers and colleagues using video conference platforms and run e-commerce operations. But the more employees a business has, the faster its connection needs to be.

Symmetric connections, where download is as fast as upload speed are especially important for businesses. With an ultrafast symmetric connection uploading files to a cloud service is as quick as storing them on a local hard disk. This is extremely useful for small businesses and home workers who are increasingly moving to cloud services for resilience, security and convenience. Fast upload speeds also facilitate video communications for both social and business interaction.

Further support for businesses can be found on the Invest In North Lincolnshire website.

Are you a potential supplier?

We are interested in supporting all telecommunication providers in the market with the delivery of better infrastructure across North Lincolnshire.

We are keen to support voucher schemes, commercial builds, pilots or any other approach and initiative. We will be fair to all providers who are interested in delivering services in our area.

Find out what we are doing to improve broadband and mobile internet in North Lincolnshire. Register your interest in having ultrafast broadband (FTTP) in your area.

We are working with telecoms providers to bring ultrafast broadband to more areas in North Lincolnshire.

FTTP offers a download speed of up to 1000mbps [1Gbps], with fibre all the way to your residential property or business.

To have the best chance of your area being upgraded, ask local businesses, friends and neighbours to register their interest too.

There will be no obligation to buy into the service when it becomes available. Telecoms providers and the Government will fund the upgrade to the network. You can then choose whether or not to purchase an ultrafast broadband contract.

Telecare is the name given to electronic equipment which can support people to remain independent in their own homes. Equipment can help someone feel safe and secure within their home and also offer family and carers peace of mind and reassurance.

An alarm or sensor can be worn by the person or placed around the home. This enables the person to directly seek help or, when a sensor is automatically triggered, alerts a call centre or an on site carer that the person requires assistance.

Find out more about Telecare services on the Staying Independent webpage.

All old analogue public switched telephone networks (PSTN) will be switched to a fully digital network by 2025. By then, every phone line in the UK will be digital, routing calls over IP (Internet Protocol) rather than the traditional telephone lines.

Everyone. Businesses, homes, schools, retail etc etc, it’s not just your phone services you need to think about. It’s everything else that currently uses the old phone network, all your non-voice services connected to PSTN or ISDN lines. Things like alarms, Electric Point of Sale machines (EPOS), door entry systems, CCTV, and faxes.

PSTN has been the backbone of the UK’s phone network for decades. But we’ve all seen the dramatic changes in technology over the past few years, especially recently. It’s all around us: smartphones, apps, the cloud, Zoom, MSTeams, Internet of Things, and so on.

What you probably don’t notice so much is the infrastructure that makes everything work. The telephone lines strung across the streets, the web of copper cables buried beneath your feet, some of which have been down there since the 19th century.

It’s now time to leap forward from PSTN to embrace the boundless possibilities of digital.

So is digital telephony better than old telephony?

Yes. As an essentially 20th century technology, the old PSTN network is increasingly out of date with the demands of modern communications.

What about the rest of the world, what are they doing?

The switch to digital is happening everywhere, fast. As technology and customer behaviour changes, phone companies across the world are moving from analogue to digital. Germany, Japan, and Sweden are ahead of the UK in making the shift. Estonia and The Netherlands are already there and have switched off their PSTN networks.

You need to start planning your move today because there could be a lot to do. Remember, it’s not just about calls. You need to review everything you’re connecting to your phone lines, like door entry systems and alarms. Many businesses have already embraced an all-digital model, moving their communications to the cloud, making calls over the internet and embracing video conferencing.

Will we be better off with digital?

The move to all-digital isn’t just because the old phone system is, well, old. It’s because all-digital communications are so much better. Even at the most basic level, you’ll be able to make and take calls on any device, from wherever you are, from the same number. You’ll link your business applications and systems with video chat, calls and collaboration, so you’re closer to customers and colleagues alike. And with everything in the cloud, you’ll be able to access systems from anywhere, working from wherever you want.

Around 900 more commercial properties in Scunthorpe will be able to access gigabit broadband thanks to £150,000 of Government cash. Read more on the Scunthorpe Broadband Boost webpage.

The Government is providing up to £210m worth of voucher funding as immediate help for people experiencing slow broadband speeds in rural areas.