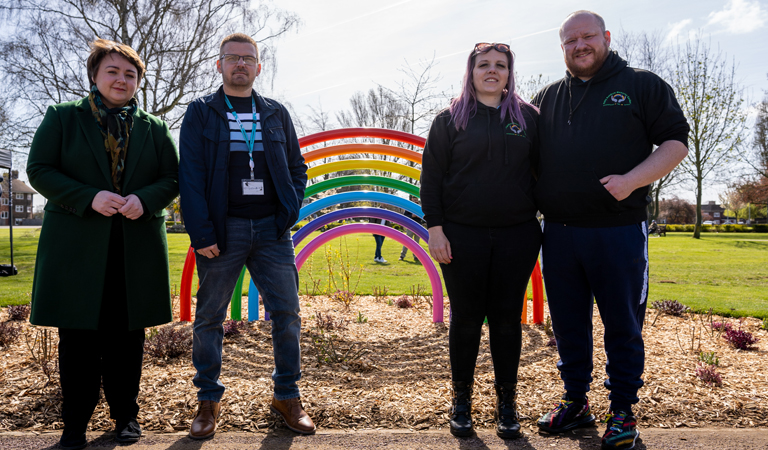 A beautiful garden dedicated to the memory of local children has been officially opened at Scunthorpe’s Central Park following an inspirational community effort.

The colourful garden includes a rainbow path, steel rainbow sculpture, memorial tree and a selection of stunning plants, all designed to help the mental wellbeing of bereaved families.

The project has been a labour of love for grieving parents, Andrew and Donna Clifford, who wanted to create a unique, uplifting space for families to reflect.

The couple lost their son Rory when he was nine days old to sudden infant death syndrome, the sudden, unexpected and unexplained death of an apparently healthy baby.

Determined to channel their grief into a project that would bring comfort to other bereaved families, the couple approached North Lincolnshire Council.

The council’s Park and Gardens Team helped Andrew and Donna identify the best location for the garden and worked tirelessly alongside dedicated volunteers to make the couple’s vision a reality.

As news of the project spread, the couple were inundated with offers of support from more than 20 local organisations, from colleges and businesses to builders and decorators all eager to help.

A wave of generosity and community spirit saw everything from steelwork and bricks to bedding plants and paint donated, all helping to bring the project to life. 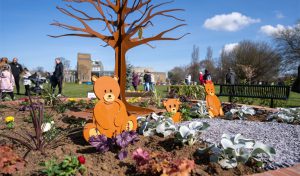 Reflecting on the opening of the garden, Andrew Clifford said:

“We are extremely proud to have such a bright and welcoming garden officially open to the bereaved community of Scunthorpe.

“We hope this garden is used by any bereaved parent, sibling, family member or friend, to visit and talk about their children while using the space to honour them.

“We have been incredibly moved by the support shown, not just at the opening but throughout the journey. We received so many positive comments, about the garden’s aesthetic but also the meaning and purpose behind it.

“We would like to personally thank our MP, Holly Mumby-Croft, who has given significant support and encouragement to the project from its inception, along with Cllr Rob Waltham, and the whole Parks and Gardens Team at North Lincolnshire Council. They have shown great passion for this project and have been a continual source of encouragement, knowledge and support.”

Leader of North Lincolnshire Council Cllr Rob Waltham, said: “It is simply fantastic to see many people and organisations come together to create this beautiful and uplifting space.

“The Baby Rainbow Memorial Garden will improve the wellbeing of bereaved families and be a positive place of commemoration and reflection in Central Park for years to come.

“The support from the community has been overwhelming, and I am proud that North Lincolnshire Council could play such a significant part in it.”

“We would also like to take the opportunity to reiterate our thanks the countless local companies who have provided their support with donations – too many to list here but they are all hugely appreciated.”

“Finally, we thank everyone who came to any of our volunteer days. We had a great turn out at all of them, and each person contributed to the progression of this garden with great enthusiasm and fantastic energy. The donation of your free time is sincerely appreciated.”