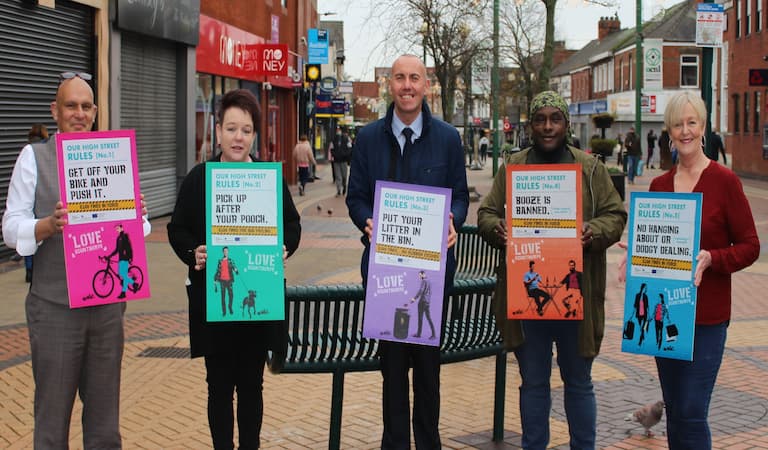 Nuisance cyclists, litter louts and beggars are being targeted in a new campaign designed to make Scunthorpe’s High Street a safer place for shoppers and retailers.

As part of ‘Love Scunthorpe’, people are being urged to follow five simple rules to create a safe and welcoming environment for everyone to enjoy.

People must:
• get off and push their bikes
• pick up after their dogs
• put their litter in a bin
• think where they drink
• and not loiter or beg

The new campaign is designed to stamp out anti-social behaviour in Scunthorpe town centre, recapture civic pride and support the many vibrant retailers. Anyone not sticking to the new High Street Rules will be fined £100.

Cllr Rob Waltham, leader of North Lincolnshire Council, said: “There are small number of people who think certain behaviours are acceptable and they need to realise pretty quickly that we will not tolerate it; the high street will be a safe and welcoming place for people to shop and to meet friends.

“We’re asking people to stick to our new High Street Rules and if they don’t then we’ll fine them for the privilege. Categorically, we will weed out that small minority of people who think the rules do not apply to them.”

The campaign comes as the police have stepped up efforts to deter burglars after a spate of break-ins in the town centre and as the council works with traders to drive forward Government-backed plans to rejuvenate Scunthorpe town centre.

The fines can be issued as part of the recently introduced Public Spaces Protection Order (PSPO). Further details can be found on the North Lincolnshire Council website.

Cllr John Davison, cabinet member for Safer, Stronger Communities, urban, said: “The vast majority of people take pride in the fantastic places we have on our doorstep. This campaign is targeting the small minority who spoil it for others. Things like dog-fouling and littering will not be tolerated in our town centres – they have no place in North Lincolnshire.

“We are working closely with local businesses to build a high street fit for the future. People are already seeing practical, positive changes like the new LED screens and recycling bins, but this is just the start.