Church Square to be transformed in to urban park 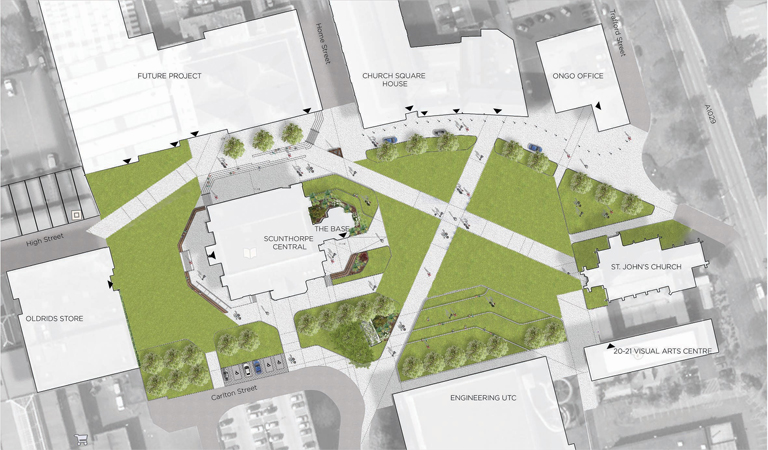 Church Square in Scunthorpe’s High Street will undergo a dramatic redevelopment as North Lincolnshire Council is to create an urban park at the centre of the town’s commercial and cultural quarter.

Scunthorpe has been named as one of only a handful of towns nationally to be given £1m from Government to kick-start economic renewal as part of the wider £3.6bn Towns Deal.

The cash is for projects which will support towns in responding to immediate challenges presented by Covid-19.

“This cash is a welcome boost to the collective efforts being made to grow our economy as we emerge safely from Covid-19.

“The amount we have been given demonstrates the confidence Government has in our investment plan. The last few months have been challenging, however there is now a genuine excitement about what the next few hold for the people of North Lincolnshire.

“As we move forward safely and securely, this investment will make a significant difference to the emerging plans for our county town. Creating a place of beauty in the heart of the town will be the next huge step forward we take.”

The cash boost comes as Government announced funding for major investments designed to further kick-start economic growth across North Lincolnshire and a prime 2.5 acre site is being redeveloped on Church Square. The council will also locate the recently revealed Holocaust Memorial in the same area too.

The £1m funding can be used for improvements to parks and green spaces, sustainable transport links, improvements to town centres such as repurposing empty commercial properties or demolition and site remediation.

A £5m cash boost will be made available for much-needed upgrades to the A15 from Barnetby top to the Humber Bridge. Additional funding for education and healthcare was announced too.

The Town’s Fund itself will receive up to £25m but it will be used to leverage hundreds of millions of additional funding for a raft of projects designed to revolutionise the area.

It follows on from almost £40m which has already been invested in the town centre in recent years and will be led by the public-private partnership Towns Fund Board which is administering the town’s share of a £3.6bn national government scheme designed to rejuvenate towns across the country. The Board is chaired by the University of Lincoln’s Vice-Chancellor Professor Mary Stuart.

These latest developments come as North Lincolnshire Council is investing more than £5m in community facilities across the area – including places such as Ashby, Barton, Brigg and the Isle of Axholme.

The council is also spearheading major infrastructure investment of £31m in the road network across North Lincolnshire, including the development of two new motorway junctions which will relieve congestion, open up development land for Lincolnshire Lakes and significantly reduce commute times to nearby cities.