Lincolnshire Day has been celebrated on 1 October every year since 2006. The date was chosen to mark the anniversary of the Lincolnshire Uprising, a revolt by Catholics to King Henry VIII’s plans to establish the Church of England in 1536.

Make the most of Lincolnshire Day with free family activities. View or download the activity pack, which includes colouring, quizzes and games.

The celebration event saw the winners of the Greater Lincolnshire Menu competition announced. The competition was launched by the three councils earlier this year to showcase the wealth of amazing food producers in the county.

Congratulations to The George at Kirton in Lindsey for their award-winning lunch dish, Sautéed Lincolnshire sausage, black pudding and chorizo on sourdough. 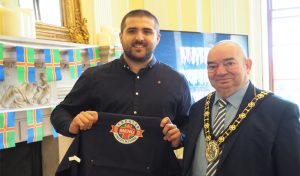 Fancy giving it a try? You can cook along using the recipe card.